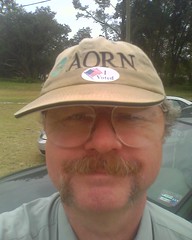 I'm not surprised, I am disappointed by the outcome of one item on the ballot here in Baja Jorja. The count on that is not particularly close, either, but perhaps close enough that the issue is not dead, and we will see further action on it.

As for the rest? I've said before. Raise your Voice, my country people, and once you've done that we go forward with what we've got.

Today is the most inspirational, inestimable

One of my favourite muses.

Pulling in to teh Ranch yesterday on the way home from both work and Voting, I paused for a couple reasons. One of them involved a stupid goat who stuck her head through the fence to browse on something and couldn't get back through because of her horns. This is her second strike, meaning the next time she does this, she'll wait in the fence for me to come back with a 60cm stretch of Schedule 40 PVC tube and some duct tape. That will provide a headdress which prevents stupid goat heads from fitting through the fence. The other reason I stopped (only helped that Stupid Goat was close to this), and this leads to doing a reprise on this post, is that I saw Miss Peggy's sign had changed.

Readers will recall that Miss Peggy, an exemplar of a Southern Lady, objected to someone taking something off her property (that so you might not need to follow that link, and re-read the previous post). Now, in that post I'd left out specific candidate names, partly because it didn't seem the more important part of the story, partly because it was pre-election and I wasn't about to be part of casting particular aspersions. Truly, nor did Miss Peggy.

Political sign vandalism is not something new this go-round, I'm sure.

Day before the election, Miss Peggy got home from work (she drives a school bus for County, here) to find a note, anonymous, along with a sign at her gate. I am going to mention candidate names in this part of the story, because now it becomes an important part of the overall tale. The sign on the gate was an Obama/Biden sign. The note said (not an exact quote):

I'm sorry your sign was taken. I don't think that's right. I'm a McCain supporter, and I want you to know not all McCain supporters are thieves. That's why I got you a new sign.

So Miss Peggy put up her new sign in place, and changed the one she'd made to replace the old on, on both sides of it inbound and outbound on our road a single word.

And, night before the election somebody came along and stole the Obama/Biden sign. Again. By mid-day on election day, Miss Peggy found another sign and anonymous note on her gate.

I'm getting downright pissed at whoever is taking your sign. Here, I got you another one. McCain Supporter.

It was that new one I spotted coming in.

Herself tells me, though, that this isn't the be-all and end of it. Out at the end of our road, where it intersects with County Highway, someone put up on the electric pole across the road two more signs. I didn't read them on the way out though I did see them, large white pieces of poster-board. Couldn't read the writing in headlights because, well, headlights don't aim that high.

Sign #2 is an injustice perpetrated on goats. No, goats will not eat 'anything'. Yes, goats will taste anything, but they do not particularly care to eat plastic, which is what those signs are made of nowadays.

Besides, I think Houdini had something to say on this too. Or maybe it was Smudge.

It is one of the reasons for wandering through the virtual halls of LJ, you know; things to read. Things to learn by reading.

I've heard or read a part of this quote, for example, one hell of a lot recently, let's say over the past eight years. Now, shame on me for not a) realising it to be a quote and b) not then researching it to learn that it is a longer quote than often seen. Oh, and I put it in my LJ Profile quite deliberately.

"My country, right or wrong; if right, to be kept right; and if wrong, to be set right."
Carl Schurz

I am particularly glad to learn that today. In part because I look to a lot of other commemorative dates as well, and for that reason another bit of a quote (and I will tell you now what I put in here is not the full quote. However, the ellipsis I'll tag on the end should let you know that, eh?) keeps running through my head. All day, it's been rambling about up there. Perhaps an easy thing to do these days, that rambling.