Got one of the shelf kits put together yesterday. Planned on getting them both done, however there were circumstances which changed those plans.

Heading out to do laundry, I'd heard sirens while loading the car. Then I didn't hear sirens.

Yesterday's winds were quite brisk, at least a stead 10 MPH/ 16 KPH from the south-southwest. Brisk enough to carry sounds, and such, all away to the north. Pulling out of our drive, still on our private road I saw smoke in the sky. Big smoke, black smoke, and rising right from an old, old house belonging to a neighbor right across the road. I called in to Herself and parked the Subaru out near but back from the road, and went to see what I could do to help.

Fire departments were already on the scene, or probably more specifically the Archer Volunteers were. They are the first responders for that side of the road, it being Alachua County and all. I identified myself to a sheriff's deputy and offered to slow/stop inbound traffic, which he allowed as a good idea. More rigs arrived as I walked back east, well off the road, from Newberry, and some marked Alachua County. Made it pretty obvious the road was blocked, all those rigs and flashing lights and all, but people were still wanting to try to get by.

One of the big concerns was that as dry as things around here've been for the past few months, that fire could easily have spread into the woods about. The house was pretty well totally involved, and the crews working kept it confined. Most of the folk I slowed and stopped were more than happy to turn back and wait for a bit. A few were friends or family of the people who live there. They'd been in church, came home when they got a call about the fire. Since no one was home at the time, no one was injured in the fire. Even their pets were OK, being outdoors at the time. Thank God (by whatever you hold that) for this part.

Turns out another neighbor from further west along the road (it's a single outlet county road) spotted the fire while driving out, stopped, called it in and grabbed the garden hose there to start doing what they could.

Winds were brisk enough that none of our livestock even caught whiff of the smoke odor.

At any rate, this all moved the schedule back (for good ... well, not good, exactly, but the helping with is good reason). So I didn't get started assembling shelves until nearly 16:00. They go together quickly, but still with one shelf done it was time to start the evening feeding rounds. Even Houdini (who was 'helping' me there in Studio) let me know it was time for Rounds.

Gotta love a dog who knows the schedule.

So today, after the Morning Rounds we'll be back over in Studio. We'll move a few things out of the way in the front room, and Herself will begin organising her storage things (herbs, seeds, beads, and such, inventory for Carmenetta's Cottage). Then I'll start assembling shelf unit #2, and we'll finish up organising. With that room opened up there are few other items from the Studio room which can be moved in. With room, it will be time again for photographs.

Yea! Yea for safe people, yea for space to work. 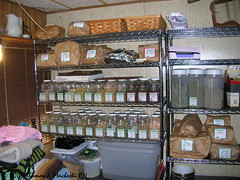 Some of the storage shelving we just put into Studio 318. Most of what you're looking at is Herself's stock of herbs and spices she sells through her Carmenetta's Cottage store.