Tired this morning, and what a hook that line is to bring you into reading here eh? Still, that's the way it is, after working until 21:20 yesterday evening. Nearly a 14 hour shift. Good news, all with my current service, so a 'comfort zone' of sorts. Other good news, it will be five and three-quarters hours of overtime. Bad news, there's no rest today because it is a Weekend Night Shift day. Oh Well, gainful employment is gainful and so why am I moaning?

Two (not so) Mysterious Packages arrived yesterday, as previously mentioned. I've eyeballed the outsides of the packages and there is no damage visible. One is about 1.3 metres (4 feet) long by 30 cm square. The other is about 60 x 60 x 60 cm (2 ft/side). Both are lighter, at least to us, than the Point Of Origin implied in their description, though their desire to reclaim their space is pertinent. Objects inside will be a bit smaller than the exteriors, but not much. I will open said boxes after feeding teh Ranch this morning. Tomorrow will be a good day to start getting used to the contents, as the weather forecast is for rain, and potentially severe thunderstorms. Therefor, Houdini will be happy if we spend some time together in Studio 318.

A Clue For You, if you are playing the Guess What MadShutterbug Is Being Mysterious About. Looking at the B&H web site for a necessary accessory which I know is not in either box.

Oh, and ETA: First mobile bill after the upgrade to two (2) Smart Phones with data plans for both, including upgrade fees (which I must check into, as I am fairly certain I should be getting the upgrade 'free' but not positive): $154. This is not extreme, yet, as I say it includes some 'one time' fees. It also includes some 'data expenses' from the prior plan with NotSoSmart Phone, primarily some text messages since texting wasn't included on the old plan. We did not exceed either data use nor text use on the new plan for the better portion of a month.

So, wait and see what the next bill looks like. Should be at least 1/3 less than this.

Since I am nattering on about Mysterious Packages, it should be obvious to you, Oh My Reader, that I intend to enlighten you about these at such time as it is both convenient and somewhat detailed.

That time is now.

The two 'mysterious' boxes, one tall and relatively skinny, the other cube-shaped, with Houdini BorderCollie Bro for scale comparison, arrived yesterday via UPS (as previously mentioned). 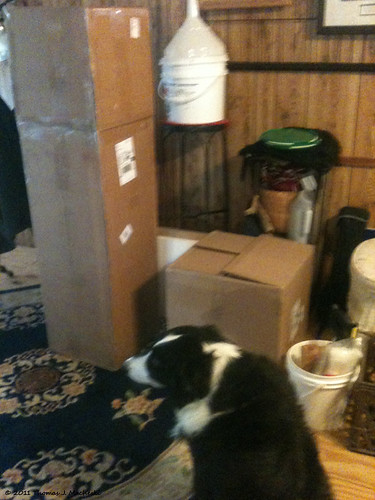 What I've not mentioned is the source of these Mysterious Packages. I'm also cheating like hell, because I already knew the contents and saw photographs of the contents (mostly). The delightful Swears Like The Sailor She Is

slave2tehtink recently acquired these items. Through portions of the tale which are mine to tell because they are not filtered, these are items she recognises the value thereof, the craftsmanship thereof, and that she is unlikely to be using for a variety of reasons. She feels strongly that they need to be with someone who will also appreciate the value, craftmanship, and is likely to use them rather than with her. Also, and I quote (you've been warned already) THEY ARE F*CKIN GINORMOUS AND I WANT MY DAMN SPACE BACK.

The other portions of the tale to which I am privy are not mine to tell you. Nor will I. Tough.

Still and all, here (behind the cut, more for bandwidth than for any Adult Content aspects) is the rest of the tale, visually and textual.

Ah! A big blob of bubble-wrap and other plastic, which formerly rested inside a cocoon of styrofoam packing peanuts.

Ah! THREE blobs of bubble-wrap and other plastic, which formerly rested swaddled together inside a cocoon of styrofoam packing peanuts.

Camera, Lens & Mount, 2 film holders (total of 4 sheets of film), lens wrap cloth which doubles as ground-glass shield for focusing. Camera? Yes, this is a Zone VI field camera, of the genus View Camera. Now, for sheer hilarity of things, this morning because My_memory told me 4x5 I spent browsing through one of my favourite photography supply houses for 4x5 sheet film. This despite, once seeing the camera, My_memory says to Myself, Oh, Hai, Yes. Not 4x5, 8x10.

The lens is a Schneider-Kreuznach G-Claron 9/355 made in Germany, so an f-9 largest aperture 355mm lens. Still researching the relationship of the size to the format. Lens this size sold recently on e-Bay for 90 pounds sterling, without shutter. In these cameras, the Shutter is a separate entity and this one is a Copal No. 3 f Bulb (wide open so long as held) - 1/125 second made in Japan.

Set out for overall size comparison. Camera needs a good cleaning, as does the outside of the lens/shutter. The shutter sounds good, with a one second setting sounding like a one second click. The bellows are supple, and no obvious light leaks. I'll need to check that later, in more detail and under some controlled conditions. The two film holders may well still be holding film. One of them, at least, is, because I cracked the dark slide just a bit, slamming it shut again when I saw the grey surface of emulsion and the notches which orient the photographer as to which side is up when loading the film into the holders.

I've no idea how long this film has been in these holders, nor how stored, nor even if exposed or unexposed...

The back re-orients for either Portrait or Landscape orientation. While not difficult to do, it requires a spot of time, as do all the rest of the setup aspects of a view camera. The general rule of thumb amongst photographers/cameras is, the smaller the format the faster one shoots. By this, I mean DSLR or FLSR (Digital, Film) in '35mm' sizes is fast work, Medium Format (again either D or F) is a bit slower but still can be fairly rapid, and Large Format is... not so much fast.

There is a tripod which came with this, made of wood and metal, and intended for outdoor use. It is in good shape also. Why intended for outdoor use? That would be due to the three GINORMOUS (yes, S2T, I use your words for this too, as they Fit So Well) SPIKE THINGIES on the feet of the tripod. The truly great news is, there is a mounting plate on the tripod head, quick release, which fits the heavy studio tripod I use as well. So, View Camera will be useful both in and out of Studio 318.

For now, though, first a good cleaning with a damp cloth, then a light check. Then... take the existing film in for processing to see, is it exposed, or test expose on it simply because it's at hand? This is partially a rhetorical question.

slave2tehtink, You and Tink do get your portraits done, in period clothing of your choice, printed, mounted, matted, framed. Oh yes, yes you do.
Collapse