It's a 'the Other West Coast' Hippie Birdbaths going out to

Great day for a Birdbaths, eh!

Thu, September 13, 2001 08:53:39
Departing Dunedin
Unknowing stranger
in a strange land
greeted with smiles and
open arms; the feel of
our childhood...

Found again with joyous hearts
Stolen by madmen
Crying Havoc! Loosing the
dogs of war upon
Our homeland
Your hospitality, heals

Written the morning we departed from Dunedin and Castlewood, P and D M’s bed and breakfast. Hand-written in their guestbook. Herself added comments and well-wishes that the angels bring their daughter’s home safely.

Retrospective
When I checked their website the next day, realising I needed to contact them about something, I found that P copied and posted my poem into the guest comments page.

This entry was originally posted at http://madshutterbug.dreamwidth.org/124868.html. Please comment there using OpenID.

No, I'm not wishing myself one; just recounting the day.

Fed the Horses, Goats, Herself fed the Hogs. Then into Herself's garden again, as yesterday, making movie quotes out of context as I applied my black thumb in preparation to re-plant for the fall crop. Things like... Dog fennel, you must meet your destiny. No one expects the power of this fully operational Death Star Rancher! And others. The bit about destiny led to 'Destiny, destiny, there's no escaping destiny.' And at the end: I love the smell of napalm pulled weeds in the morning. It smells like victory!

Then to the House for brunch (leftovers). Sent a Hobbit Birthday Pressie to a friend who is currently deployed. OK, so most of that is pretty much a usual day around here.

Afternoon off to town with Herself, shopping. Picked up a folding table for Studio 318 booth pavilion when setting up at weekend shows. A strap and rigid blade brush trimmer for the weed wacker. Three inch PVC tube, which will become molds for Herself's cheeses. New shorts and shirts for myself. So a bit more in line with the sort of day it purports to be.

Now, because (ahem) I know you're waiting for it, on to working on today's Decade Ago retrospective.

This entry was originally posted at http://madshutterbug.dreamwidth.org/124971.html. Please comment there using OpenID. 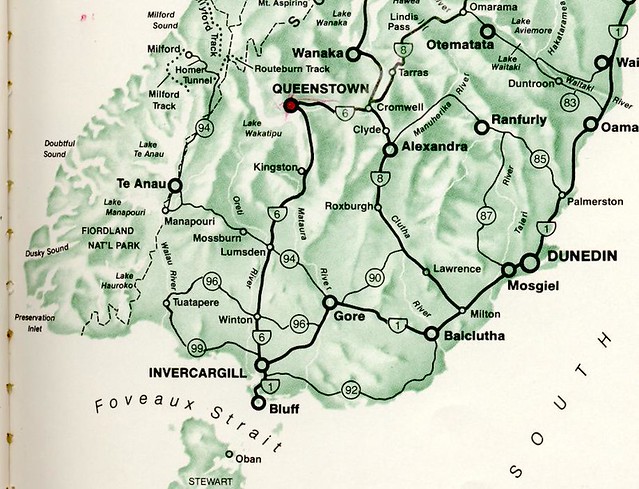 We left Castlewood by 09:15, finished with the bank by 9:45, and walked by the cathedral; I knew it was Anglican, and it is St. Paul’s. One of the reverend’s greeted us as we walked up the steps, a lady, my first time meeting a priestess (do they call them priestess, or priest? Or minister?). We paid our respects to the victims of the New York attack, lit a candle. We then walked back to the car and were on the road by 10:20.

Stopped in a small town about 11:00, and I’ll need to look at the map to recall the name. Either that, or my photo notes. We ate our lunch at a picnic stop just outside town, right about noon, because Herself told me the services at St. Paul’s started at noon.

Then we proceeded from there. Paused in Clinton to take some photos, and Herself started taking photos from the car. We drove the Clinton-Gore highway, and yes, it is labeled the Presidential Highway.

We made another stop just south of something Dome for another photo session. Some interesting pines there... weather warm, don’t know the thermometer reading but into the high teen’s, I’m sure. Celsius, that is, of course. Temperature here is measured in Celsius.

Arrived Te Anau near 16:00, found the Cozy Kiwi B&B with no problem. Then again, Te Anau isn’t very big, and the two places we’ve stayed previous to this were both in larger cities (Dunedin population is approximately 100,000). 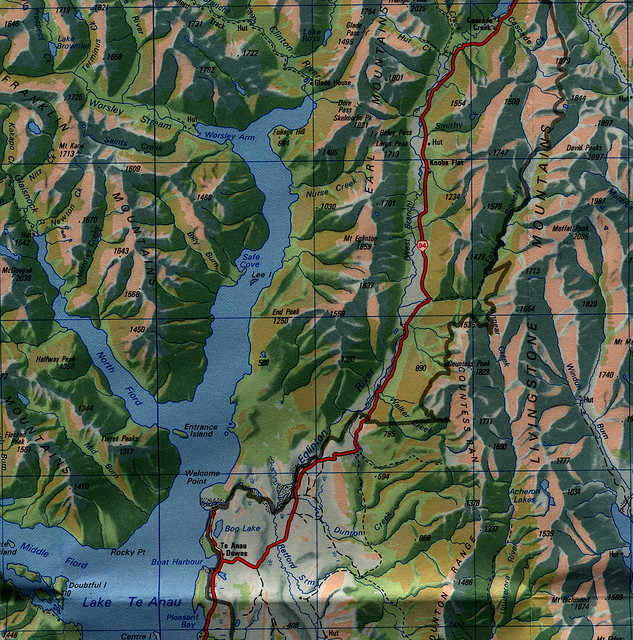 Dinner early this night, and done with it by 19:45. I ordered venison, which is an export product here in NZ. Seriously, they raise deer to export the meat. Fairly big product for them, and not a lot of local restaurants offer it for that reason. Caused the cook to pause when he asked how I wanted it done (sort of a cafeteria style, not exactly, and could specify which cut one wanted going through the line). Told him to 'Threaten it with the heat.'

We tried to get back to the B&B straight away, but side tracked ourselves finding the Southern Cross again, and then being mildly accosted by a friendly and more than slightly tipsy Kiwi. While we never learned his name, we did learn he worked on a dude ranch in Montana for 50 days.

Even with that side excursion, we made it back to the B&B before 21:00, and are about to treat ourselves to a movie for my birthday. Small screen, though, not on the television.

Retrospective
We'd looked for the Southern Cross several times in Chch, however the skies were often overcast and the city glow also didn't help. We hadn't looked in Dunedin. It is a fabulous sight, finding it; no surprise once one's seen it why both Aus & NZ feature the Cross on their flags.

The Cozy Kiwi was interesting and not quite what we expected, in one manner. The building is (was, in 2001) fairly new. The rooms looked and felt more like motel rooms, though they still provided the commons which served as the breakfast room and a lounge for anyone throughout the day.

There are other things from the drive, things I started to notice as we went through the various small rural communities. One item, because we stopped for this a couple times, is the public restrooms. I mention this because of a comment Robert Heinlein made in interviews and in his fiction, that one measure of the health of a given society is the cleanliness of their public restrooms. Sad to say that here, not always a place I'll choose to actually use. By this measure, though, pretty healthy place, NZ.

The other: every community we stopped in, many we simply drove through we still saw, the Memorial. All of them, with a memorial to the Great War. I've commented on this in other postings here, won't go into it again much now. Simply, finding Memorials in Chch and Dunedin, both fairly big cities, didn't surprise me much. This, though, finding them everywhere, started to pique my interest.

No, not posting photographs from the drive. Made them, yes. Not scanned yet.

This entry was originally posted at http://madshutterbug.dreamwidth.org/125366.html. Please comment there using OpenID.
Collapse